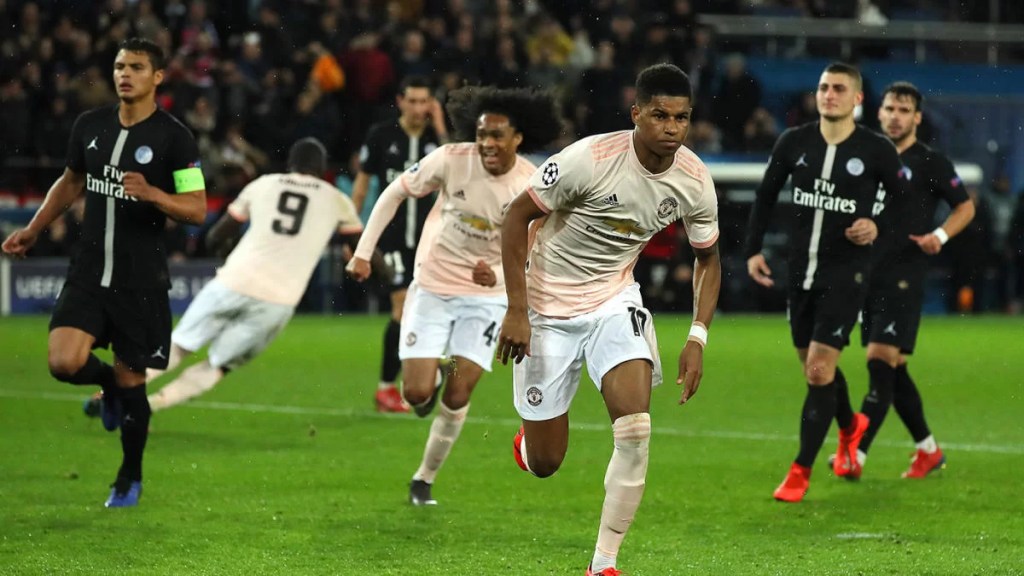 Teams with players with big names are seen to be knocked out of the tournaments by average or small teams. These kinds of situations keep all teams on their toes, both the best, the average, and small teams.

Another interesting feature of the Champions League is the 2nd leg, in which we see insane comebacks that amaze us. It is fair to say anything is possible in the UEFA Champions League. Here are 5 craziest comebacks in UCL in the last decade:

In the Round of 16 of the UCL, 2019, Manchester United overturned a 2-goal deficit away from home. It was in the early days of Sir Ole Gunner, Manchester United’s coach at the time. And the red devils were having a fun ride. Manchester United played a good game despite not having some of their important players available.

PSG was obviously the better side even during the match but luck wasn’t on their side. Romero Lukaku capitalized on two defensive mistakes in the 2nd and 30th minutes respectively and a late penalty strike by Marcus Rashford help Manchester United seal a spot in the RO8.

The ‘away goal’ rule at the time was the most important and deciding factor of the game. In aggregate, it’s 3-3 for both clubs.

At the end, it was beginning to look like the great PSG are so good at losing out in the biggest European competition, champions league.

Ronaldo got fined for this celebration against Atletico Madrid.

Cristiano Ronaldo and Diego Simeone don’t seem to get along with each other on the pitch.

Quick fact: All through Diego Simeone’s rule in Atletico Madrid, he has only conceded 4 hat-tricks and all 4 from Cristiano Ronaldo.

With the fact stated above, you see why they both don’t get along on the pitch.

Diego Simeone was so happy with his team home win that be went ahead to celebrate in a way that got him sanctioned later on. In the return leg, just like we all expected, Diego Simeone would park the bus to defend his 2-0 win in the first leg. They ended up having 0 shot on target throughout the match.

Ronaldo was the man of the hour, stepping up in the big games like a norm, he scored a hattrick, including a penalty to make it 3-2 on aggregate. That was the first time Juventus progressed in the champions league after a first leg loss since 2005/06.

Ajax are known to be that small team who annoys the big ones in the competition. They might not end up winning the tournament, but they are also sure to cause some exciting havoc with the little time they have in the tournament.

Totteham was set to be their next victim this time in the Semifinals (2019). After a 0-1 lead at home, Ajax scored two first half goals. To a normal person and definitely everyone, the game is finished.

But then there was Lucas Moura whose hattrick sent Tottenham to their first ever champions league final with his hattrick. The last goal coming in the 6th minute of added time. It was all tears for both teams after the match, but joy for Tottenham players.

Barcelona was having a fun ride in the champions league 2018 without any loss until the return leg against Roma. After a 4-1 win at home, the team looked a bit comfortable or maybe luck just wasn’t on their side

.Looking at the Caliber of players they had at the time, the comeback from Roma was shocking although well deserved and they proved to be hungrier than Barca throughout the match .Goals from Eden Dzeko, De Rossi, K Manolas saw Roma seal a win in the quarter finals.

Roma was obviously the underdog, and having nothing to lose, they went all out to get what they wanted. They had twice as much shots on target as Barcelona in match.

For the second season in a row, Barcelona’s first loss in the Champions League contest will be the one to kick them out of the tournament.

FC Barcelona were obviously struggling but they’ve managed to display beautiful performances and had a foot in the finals of the 2019 champions league. To make the work easier, Liverpool was without two of their most important forwards, Mohamed Salah and Roberto Firmino.

The game looked finished even before it started with Lionel Messi’s fine form. To our surprise, Divock Origi and Georginio Wijnaldum, two of the most unlikely heroes stole the night with two goals each to put Liverpool in the finals. It was the second time Barcelona will forfeit a 3 goals lead from the first leg of the champions league, the first against Roma, a season before.

The last here is Barcelona 6-1 PSG, read about it here.

Which was the most surprising? Share your experience below.